SAVE THE NEW RIVER!

The Story of the New River Pollution Crisis

In early 2017, the Crocodile Research Coalition (CRC) began hearing reports of dead fish and ill, white or pink crocodiles along New River around Orange Walk Town in northern Belize. Community members were concerned of a contaminant in the water affecting the health of the river ecosystem. During nocturnal eyeshine surveys and capture surveys in March and April 2018 in conjunction with the countrywide Morelet’s crocodile population survey, CRC witnessed the concerns of community members. We observed many lethargic crocodiles of all sizes illustrating “white” skin patches or skin with a metallic bluish tint, in addition to pockets of dead fish and eutrophication. Crocodiles near Orange Walk Town illustrated “white patches” on their skin and illustrated a bluish tint, as if something in the water was causing the skin to slough off easily. Besides lethargy, some crocodiles were also “star-gazing,” a neurological symptom that paralyzes crocodiles from moving. We informed the government immediately.

CRC conducted necropsies on 2 Morelet’s crocodiles that were captured near along the New River near Banquitas Bridge and Maracas Restaurant in Orange Walk Town. The CRC team conducted necropsies immediately to obtain the most accurate samples for future heavy metal analysis, however collecting of samples proved difficult given upon opening up the thoracic cavity, the organs were already disintegrating in both crocodiles (especially the kidneys and liver). This is very abnormal, and given the state of some of the organs these animals have been chronically exposed to a contaminant and dying slowly for a few months (this was confirmed with fellow colleagues from the IUCN/SSC-Crocodile Specialist Group). CRC is unaware of any disease to cause such disintegration of organs as observed in these crocodiles. Given the state of organ decomposition (even while they were alive) and the white skin of these crocodiles, CRC has given the names of these crocodiles as White Walkers.

The CRC has been asked by the Ministry of Agriculture, Fisheries, Forestry, the Environment, Sustainable Development and Climate Change under the authority of Forest Department to further our investigations to identify the root of the pollution issue to help save the New River, in addition to hopefully provide information to prevent such a catastrophic pollution event to happen elsewhere in-country. We intend to conduct monthly surveys of New River, utilizing the population and health status of crocodiles as an indicator of the state of the environment. Water and soil samples have been taken, and we will continue to collect tissue samples for heavy metal and pesticide analysis to monitor pollutant levels.

We understand it may be a lengthy process to clean-up the river, but the CRC hopes that our research can provide government and the communities along New River the data necessary to ensure the long-term survival and health of this important ecosystem not just for the wildlife, but also for the multiple communities that depend on this river for their livelihoods.

Local Film Maker Daniel Velazquez created a short documentary about the issue and its impact on the health of the river. Head to YouTube to check out this 3min film! https://www.youtube.com/watch?v=07AGmSOfjFs&t=5s

You can help the CRC and our partners in Saving the New River!  Any financial donation will greatly assist us in our monitoring program.

Project Update:
Our most recent survey for the New River contamination project occurred on November 29 and 30, 2021. The CRC team took off from southern Belize to the northern districts of Orange Walk and Corozal to conduct Nocturnal Eyeshine surveys and Mark and Capture surveys. On the first night, the team managed to capture 8 crocodiles (1 juvenile, 2 subadults and 5 adults) in Orange Walk. Interestingly, we recaptured a juvenile crocodile near Orange Walk Town that had grown 14.4 cm over 6 months. We collected samples of tissue, blood and toenails from these individuals to measure concentrations of heavy metal burdens. On the night of November 30, we conducted a Nocturnal Eyeshine survey and Mark and Capture survey near the mouth of New River and Corozal Bay Wildlife Sanctuary with the help of our partner organization Sarteneja Alliance for Conservation and Development. During our surveys, we observed very wary crocodiles as larger individuals evaded our boat as we approached. Nevertheless, we counted 15 crocodiles, of which most were hatchlings. Additionally, we observed two adult crocodiles in Corozal Bay. Our data indicate that the New River in the northernmost district of Corozal holds a significantly lower density of Morelet’s crocodiles than in Orange Walk District. 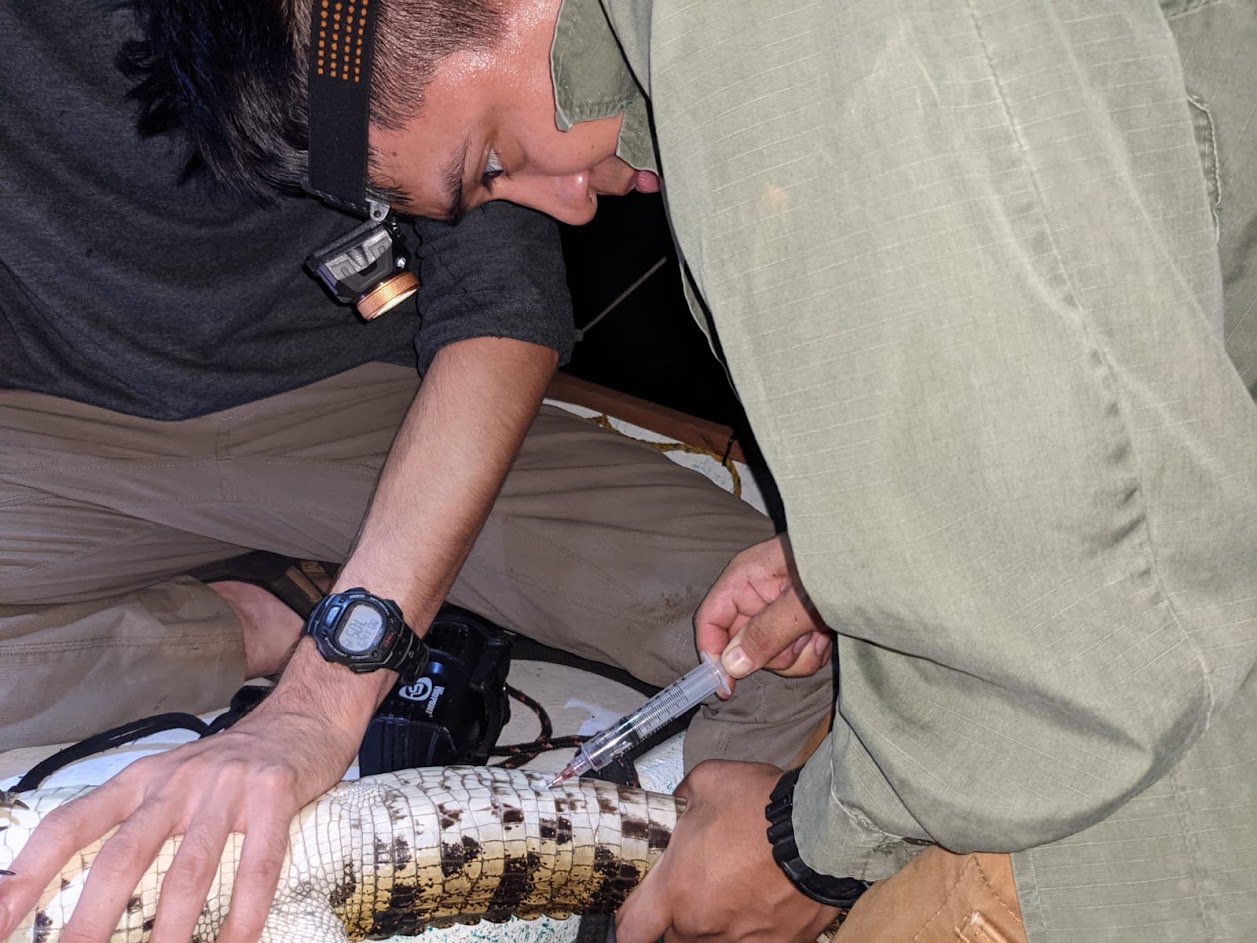 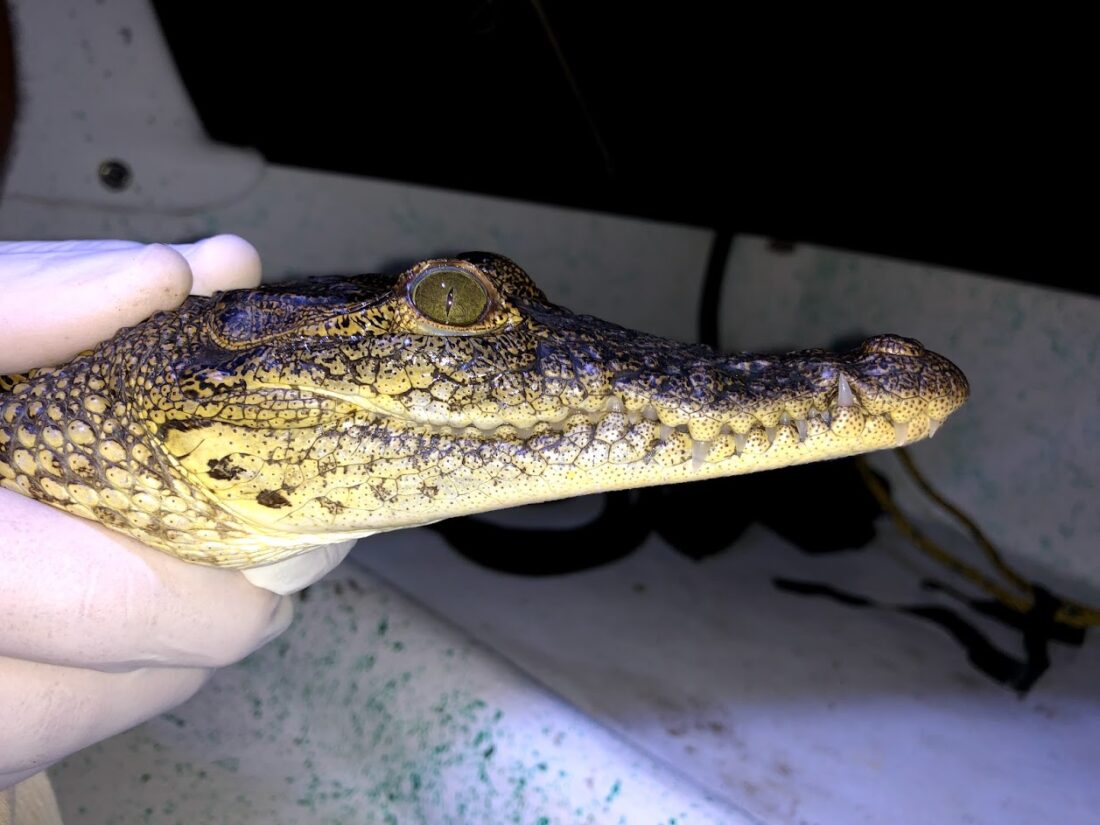 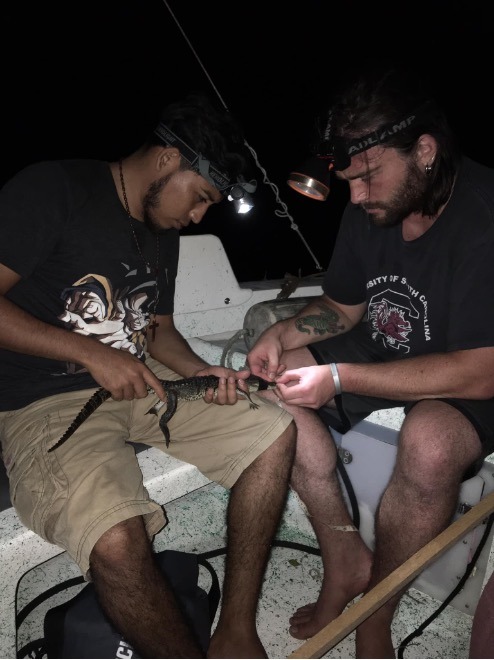 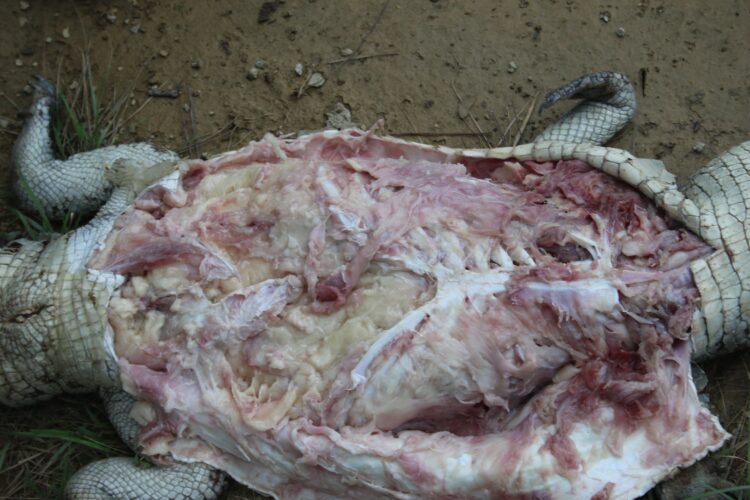 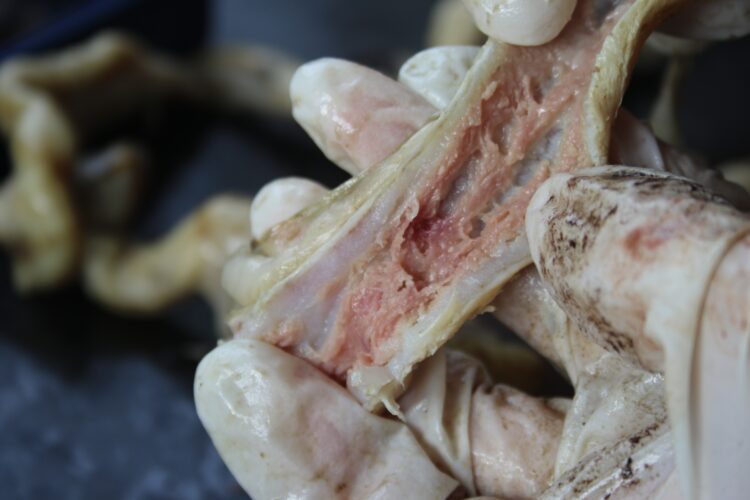 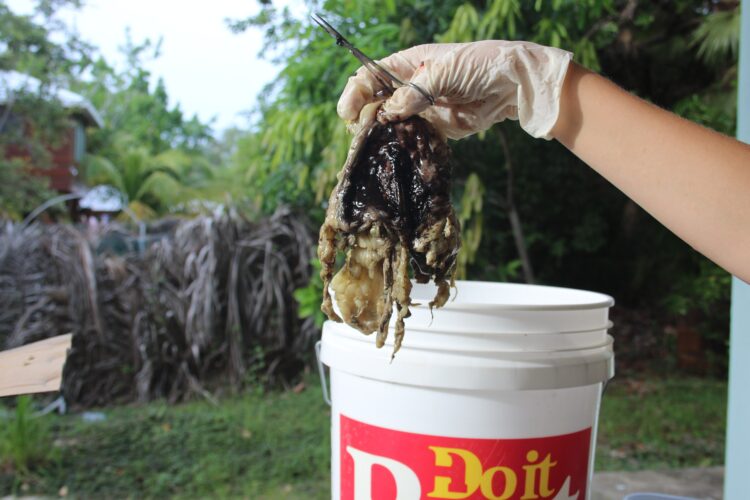 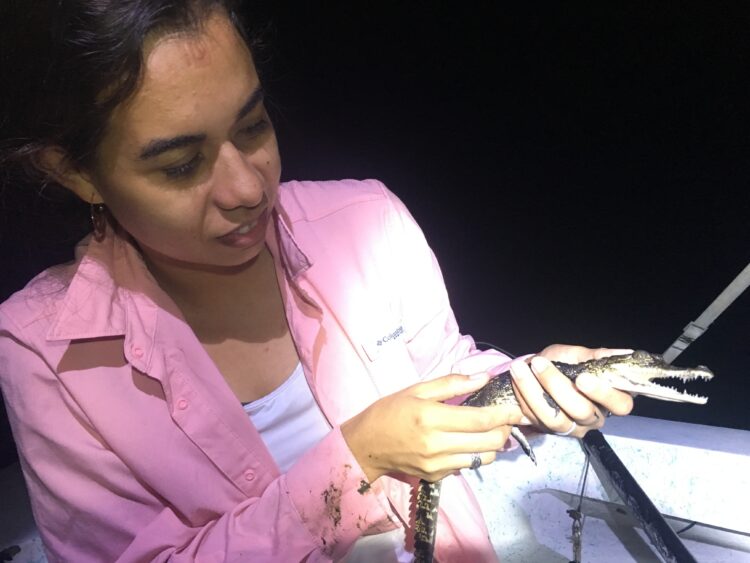 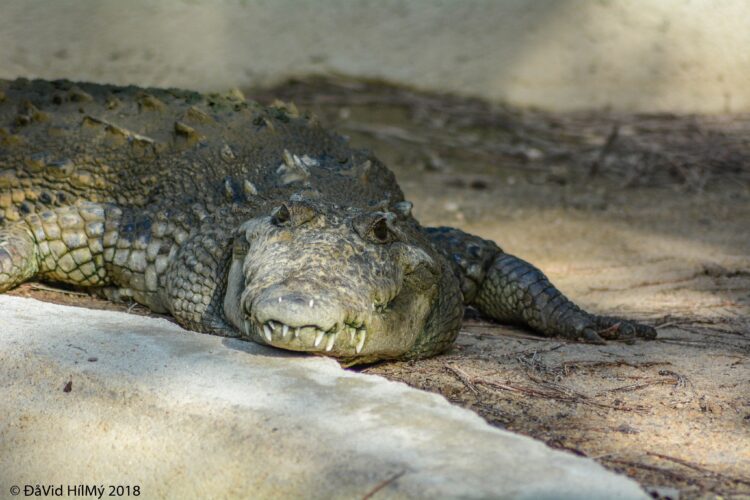 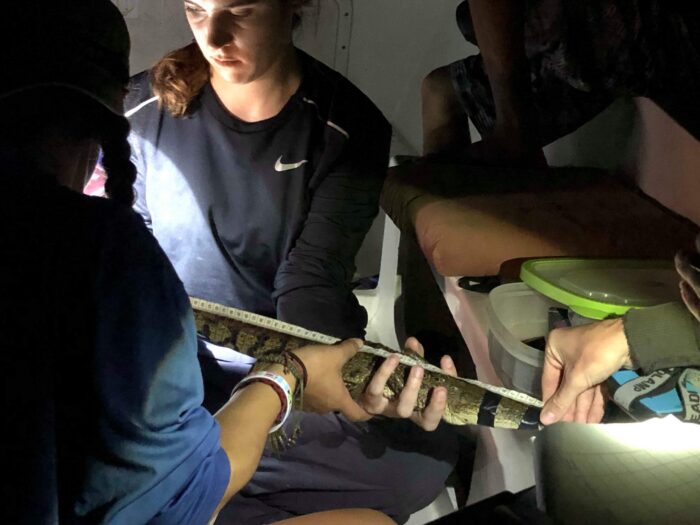